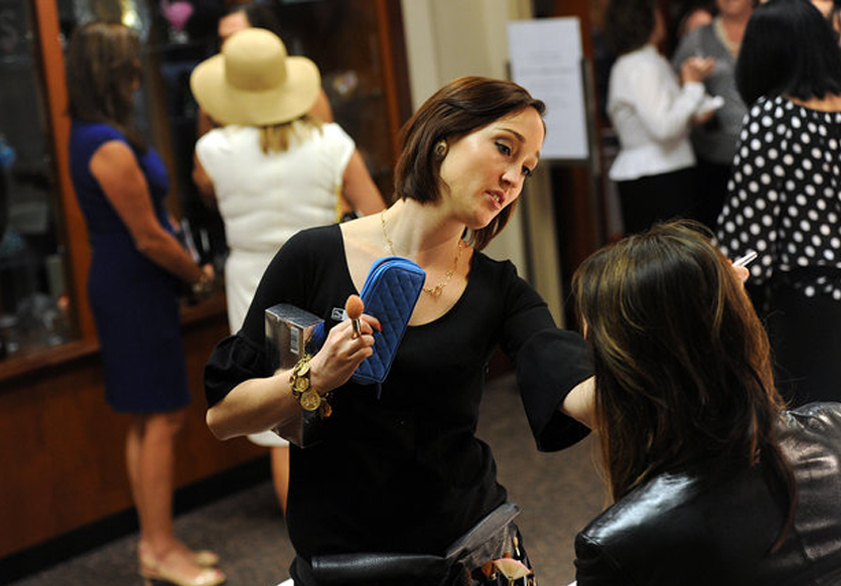 Nina Guy, makeup artist for McEvoy and Saks Fifth Avenue applies makeup to a guest Monday at the South Florida Museum during the Couture in the Courtyard museum benefit.

Couture in the Courtyard, a museum fundraiser in its fifth year, drew more than 400 well-heeled women for shopping, lunch and a spring fashion show by Saks Fifth Avenue Sarasota.

Gail Hoey, who just moved to Sarasota from Minneapolis, got her eyes done at the Trish McEvoy makeup table.

“I was hoping to get a little touch-up, something to make me look less tired, maybe add a little sparkle,” she said.

Over at the perfume counter, Jennifer Allen, wearing a little black dress and matching hat, picked up a bottle of her favorite fragrance: Alien Eau Extraordinare by designer Thierry Mugler, which is exclusive to Saks.

“I had never been to the museum before and after coming, I realized it’s a little hidden gem in Bradenton,” said Allen, a Longboat Key resident.

Tables swathed in blood-orange cloth and bouquets of pink flowers were arranged in the museum courtyard for lunch. Michael’s on East provided

heaping salads topped with Parmesan-crusted chicken. When the sun and 75-degree weather began to make polyester uncomfortable, ladies fanned themselves with leaves provided by Hancock Bank.

The Saks store at the Westfield Southgate mall in Sarasota will relocate to the Mall at University Town Center when it opens this October. Saks General Manager Joel Ellzey introduced the fashion show by touting the new location.

“This will be the first full-line Saks Fifth Avenue store in 12 years,” he said, adding the store will feature a men’s shop, shoe salon, 20 designer boutiques and an in-store restaurant, Sophie’s at Saks.

The Mall at University Town Center was also a prominent sponsor. General manager Octavio Ortiz said the mall will continue to support the community now and well after the opening.

The Nov. 1 Snooty’s Gala is the next South Florida Museum fundraiser.

Visit my blog and get the latest information about the new events, videos, pictures, and more exciting news about Makeup and Lifestyle. Subscribe to my website and get the most recent newsletter.